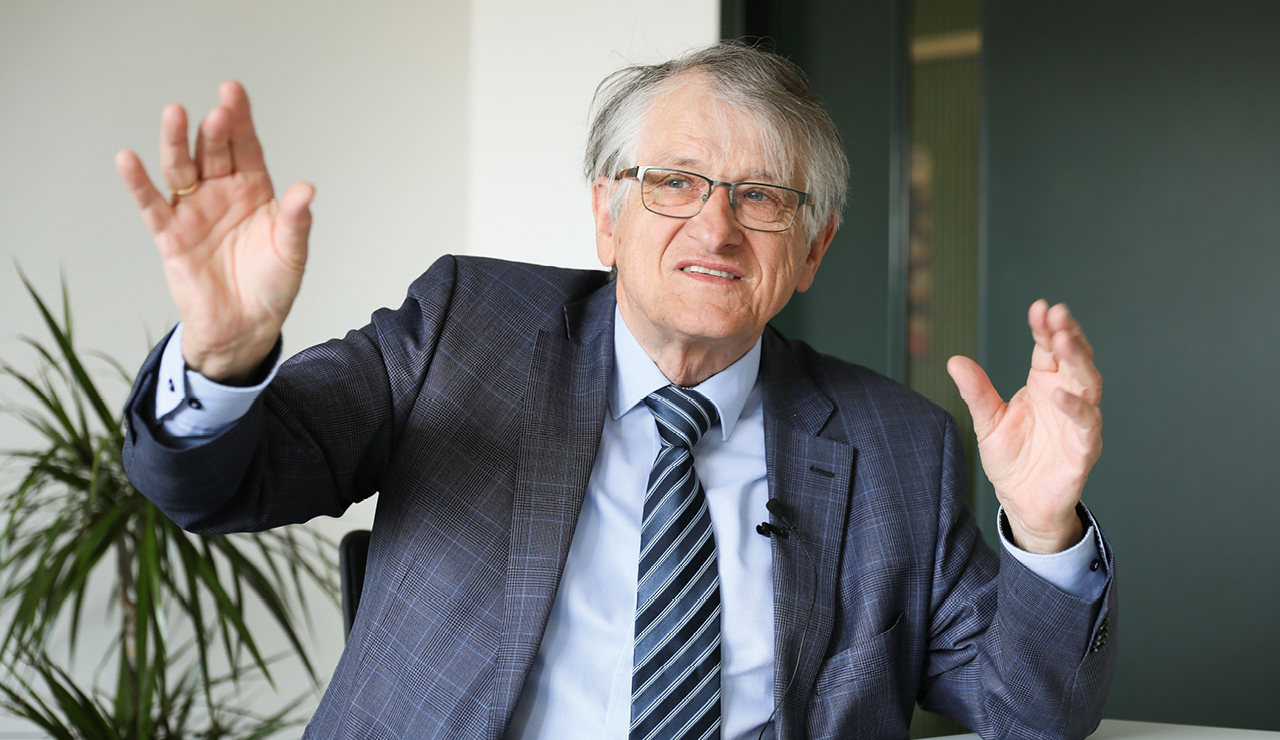 On 20 May 2019, the definitions of four International System base units will change and be tied to physical fundamental constants. We spoke with Klaus von Klitzing, the Nobel Prize winner who played a crucial role in driving this change.

«This date will mark a big change that will undoubtedly go down in history books.»

Professor Klaus von Klitzing is a German physicist who won the 1985 Nobel Prize in Physics for discovering the integer quantum Hall effect. He gave a lecture at EPFL in mid-April about the upcoming transformation in the world of measurements.

What will happen on 20 May?

This date will mark a big change that will undoubtedly go down in history books: the redefinition of four base units in the International System of Units, or SI system, by tying them to physical constants. On this date, the kilogram, ampere, kelvin and mole will be established in terms of new permanently fixed values of the Planck constant, elementary electric charge, Boltzmann constant and Avogadro constant, respectively.

This change had been under discussion for many years and was finally approved last November in a unanimous vote by the countries members of the General Conference on Weights and Measures. To my knowledge, this is the only big international conference where all the countries present voted in favor of a global change with major ramifications for industries worldwide. The date of 20 May was chosen to commemorate the signing of the Meter Convention – which forms the basis of our current measurement system – on 20 May 1875. Since then, 20 May has been celebrated every year as World Metrology Day [the science of measurement].

Do all countries use the SI system?

The SI system, also known as the metric system, is a decimalized system of measurement and is used widely. But some countries – like the United States, Liberia and Burma – haven’t adopted it; the US still uses inches and pounds, for example. Fortunately, there are set conversion factors between the pound and the kilogram and between the inch and the meter, so that switching between these different mass and length units doesn’t impair accuracy.

But it’s not good for international trade. Imagine the inconvenience for car manufacturers, for example, when you have non-metric parts for cars in the US and metric parts for cars in Europe. I don’t expect that all countries will adopt the metric system anytime soon, but as scientists in the US like to say, they’re moving inch by inch to the metric system.

«Fundamental science is the most important ingredient for new breakthroughs. »

Why did you advocate this change in the definition of SI base units?

There are problems with the existing SI system, especially with the kilogram. The standard for this unit is just a piece of metal produced in 1889 and kept at the International Bureau of Weights and Measures in Paris. This object still forms the basis for all mass measurements around the world. The problem is that the official mass of this original kilogram differs from the kilogram copies kept at national metrology institutes like the one in Bern. Scientists have been comparing the masses of these different kilograms over the past hundred years and have found that the differences are increasing with time. The copies seem to be heavier than the original kilogram in Paris.

In fact, we know that the material used in the original kilogram is not stable. The object is becoming lighter with time because the gases dissolved in it – which result from its production process – are gradually diffusing out. We therefore needed to replace the original kilogram with something more stable.

So fundamental constants will replace metal prototypes. Will this have an impact on our daily lives?

No, the change will be made in such a way that people won’t even notice. For example, the kilogram on your bathroom scale on 21 May will be the same as on the day before, even if the official definition has changed. On 20 May it will be defined as the amount of mass necessary for the Planck constant to be exactly 6.62607015×10-34 kg·m2·s-1. This is a physical constant given by nature, stable and identical everywhere in the universe. So experimentalists anywhere should be able to create a kilogram just by using fixed values for these constants. The same idea applies for the ampere, kelvin and all other SI units.

What was your role in this change?

It’s connected to my research, in that I discovered a simple way to directly measure fundamental constants with high precision. This made it possible to tie measurement units to fundamental constants. By 1990, my discovery of the quantum Hall effect – for which I won the Nobel Prize in 1985 – had been implemented worldwide as a reference stable standard based on the fundamental laws of quantum physics. In fact, the idea had been around for a while, but having an idea is not enough, you have to be able to implement it in a practical way.

Could you explain your Nobel Prize-winning discovery to us in layman’s terms?

To make this result understandable, I compared my discovery with how we measure velocity. We all know that there are many different velocities around us – for instance, we intuitively understand that the velocity of an airplane differs from that of a car or bicycle. However, all types of electromagnetic waves – microwaves, radio waves, infrared light, visible light, etc. – have exactly the same velocity: what’s known as the speed of light. This velocity is a natural constant. So there we have a fundamental velocity, and I similarly discovered a fundamental electrical resistance that is a constant, given by nature and that humans can’t change. Something very fundamental, that always has the same value. It’s called the von Klitzing resistance or constant, and it’s approximately 25.8 kΩ.

How can we promote fundamental research in a world that cares mainly about applications?

Until recently, I was the director of the Max Planck Institute, which focuses on fundamental research. I would like to quote Max Planck, the first president of the Max Planck Society, with the following statement: “Knowledge must precede application.” I think every insight we gain is an excellent starting point for unexpected new applications. I strongly believe in expanding our knowledge through fundamental research where you have the freedom to enter new fields with the potential to discover new applications. All disruptive technology is based on new knowledge. To me, fundamental science is the most important ingredient for new ideas, new breakthroughs.

If you speak with other Nobel Prize winners, many of them will say that they discovered something unexpected. You can’t plan it. It’s just by looking at the facts of nature and asking questions. Then you can say: “OK, here’s something new.” I think it’s fantastic when you have the freedom to do this kind of research. There’s always the chance of finding interesting new applications.

Of course, even when doing fundamental research, you have to be on the lookout for applications, and you have to grasp the major challenges and opportunities facing various industries. In my opinion, each industry should also invest in fundamental research and perform its own in-house R&D for its particular field, so that it can interact with scientists in academia. Companies shouldn’t just buy ideas and patents from a university or acquire startups – they really should do some of their own research. 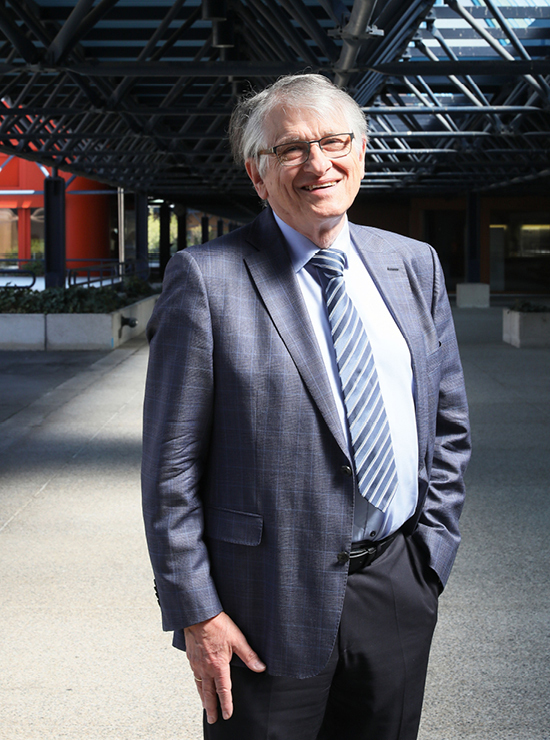 «The Nobel Prize is the highest scientific honor, with the consequence that people tend to expect too much from its winners.»

You won the Nobel Prize more than 30 years ago. What has that changed in your life?

First, I’m not sure I would have been invited to speak at EPFL without a Nobel Prize under my belt. It’s fantastic to have this distinction because you can attract brilliant students and get good funding, but you also have a lot of additional responsibilities.

The Nobel Prize is the highest scientific honor, with the consequence that people tend to expect too much from its winners. Many people believe that because you won a Nobel Prize, you know everything and have answers to all the world’s major questions. But in reality, you’re a scientist highly specialized in one particular field.

People also sometimes tell me: “You have the power to change something – if nothing else, you have the power of shame.” Indeed, when Nobel Prize winners point out problems, their opinion carries some weight. That’s because we can speak the truth more freely. We can be wrong, but at least we’re not lobbyists.

So there are a lot of positives, but also a fair share of burdens.

Where do you keep your Nobel medal?

I always put it in my suitcase when I travel for lectures, and I usually show it. Especially in Asia, where people are crazy about being able to touch it!

1972: PhD in physics from the University of Würzburg, Germany.

1980-1984: Professor at the Technical University of Munich, Germany.

1985: Winner of the Nobel Prize in Physics for discovering the integer quantum Hall effect.

> NEXT CAMPUS LECTURE: RICHARD BALDWIN WILL GIVE HIS CAMPUS LECTURE “THE GLOBOTICS UPHEAVAL: GLOBALIZATION, ROBOTICS, AND THE FUTURE OF WORK” AT THE FORUM ROLEX ON 15 MAY.

> DISCOVER ALL THE UPCOMING CAMPUS LECTURES ON: celebration.epfl.ch