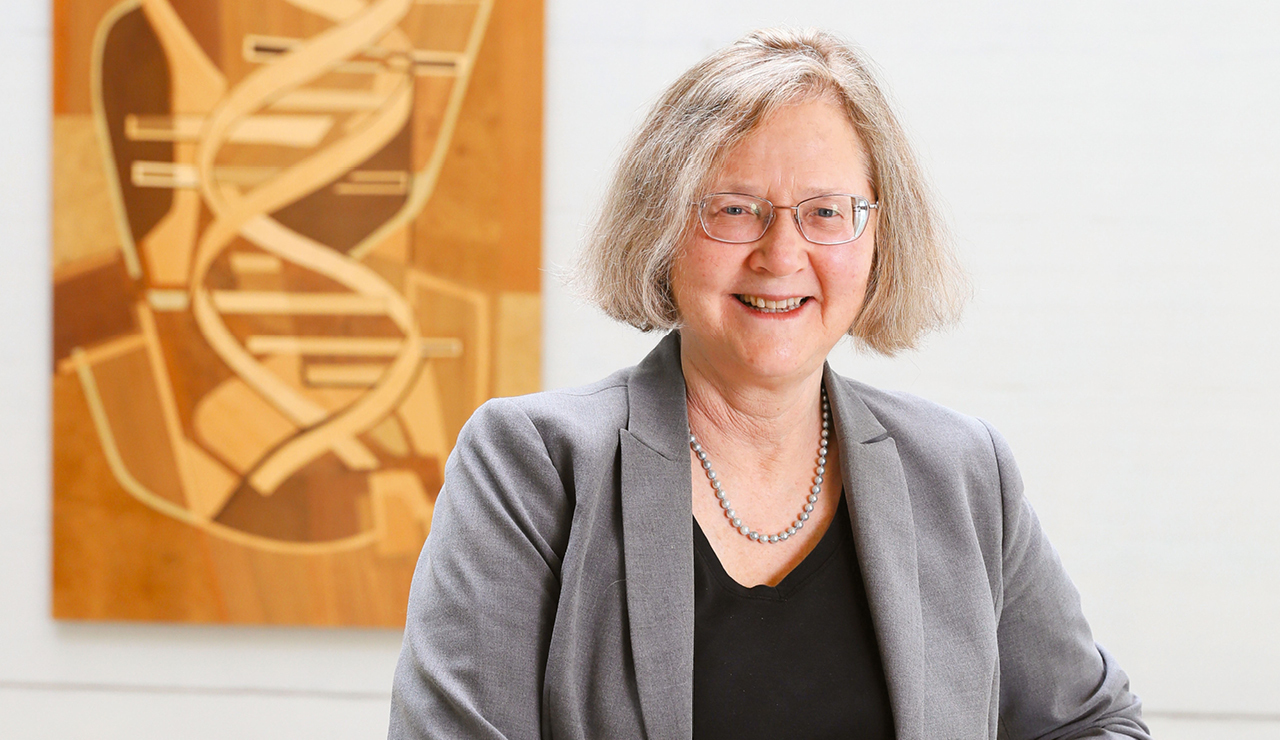 Elizabeth Blackburn, who gave a lecture at EPFL in early March, was a co-recipient of the 2009 Nobel Prize in Medicine for her work on the enzyme telomerase. In this interview, she explains that we have more control over our own aging than we might think.

Now an emeritus professor at the University of California, San Francisco, Elizabeth Blackburn began her scientific career by studying the chromosomes of a protozoan, Tetrahymena thermophila, and in particular its chromosomal ends, known as telomeres. Through their research on this organism, she and her then-graduate student Carol Greider discovered telomerase, an enzyme capable of lengthening these chromosome ends. This was a major discovery, since the shortening of telomeres has been found to influence aging.

Could you briefly explain what telomerase is?

First of all, I need to explain what telomeres are, because they’re really the key. Telomeres are the protective ends of our chromosomes, the DNA at each tip. They shorten with cell aging – each time the cell divides they lose some of their length. Telomerase, the enzyme we discovered, has a very interesting function: It adds extra telomeric DNA when the telomeres get too short to protect the genetic information.

«Over the years, telomerase
has been found to be a double-edged
sword – we need it but we don’t want
too much, and it has to be in the right places.»

So telomerase could be used to prolong life expectancy?

The balance has to be just right – there has to be enough telomerase to maintain the telomeres, but not too much. If the telomeres are too well-maintained, then some potentially cancerous cells could keep multiplying more than they would otherwise. And this increases the overall chance of getting certain cancers. Over the years, telomerase has been found to be a double-edged sword – we need it but we don’t want too much, and it has to be in the right places.

In your book The Telomere Effect, published in 2017, we learn that we have more control over our own aging than we might think.

We know, of course, that all human beings age and eventually die. But what’s interesting when we look at each other is that some people stay healthy longer and others really seem to suffer some of the conditions of old age earlier. The question is to what degree is that controlled. We certainly know that many factors come into play: if we eat really bad food all the time, if we don’t do any exercise, if we get no sleep, and so on. We know certain factors make us less healthy and more likely to develop diseases. What I, and many others, did was look and see if that was because the telomeres, which protect the chromosome ends, are less well maintained when we don’t lead a healthy life. One interesting thing we found is that, in addition to the factors we can control as individuals, there are a lot of societal factors that affect telomere maintenance.

What kinds of factors?

One of the most startling to me is if somebody was in a deeply stressful, abusive situation for a long time as a child or as an adult, then their telomeres are proportionately shorter. And if somebody has not been able to finish their education, which can be a clear reflection of many stressful circumstances, that person will, even at middle age or later, have proportionately shorter telomeres and therefore less chromosome protection than somebody who benefited from a full education.

In several of our collaborative studies, we also found that the stress that a mother experiences during pregnancy is directly connected to the length of her new-born’s telomeres. The reason it matters is that statistical studies show that the shorter somebody’s telomeres are, the more likely they are to develop illnesses such as cardiovascular diseases, diabetes, lung diseases and certain cancers later in life. Of course, these are statistical results in studies of populations. It doesn’t mean that if your telomeres are long, then everything will be wonderful, or if your telomeres are on average a bit shorter, everything will be terrible. But it does affect the likelihood of someone developing these diseases – it contributes to the disease-causing processes.

While we do have a certain amount of control as individuals, the research has also shown that public policies that are not directly related to health but rather to economics and well-being can have quantifiable health impacts. We can now better control aging-related factors in the decisions we make as a society, as well as in own personal lifestyle choices.

Prolonging life expectancy is the fantasy of transhumanism, which sometimes cites your research. Do you feel comfortable with that?

Our research relates to our cells’ ability to keep on replenishing themselves and to function. It has an impact on how likely people are to get aging-related diseases. And it’s true that many of them are major causes of human mortality: cardiovascular diseases, diabetes, lung diseases and certain cancers. But there are obviously many other things that determine the human lifespan.

I don’t think our work means that humans will live to be 1000 years old. You’d certainly have to maintain the telomeres to live that long, but that alone won’t prolong anybody’s life that much. We know how long humans can live in the best of circumstances. Maybe we can push that a bit further, but we really don’t know if the human system, which is so complex, is capable of really upping the mileage.

Our work relates essentially to what we call the ‘health span’ – how much longer we can stay healthy before eventually dying of old age. The level of health can vary enormously among individuals. And that’s why we are interested in understanding the aspects that can be molded by factors we or society have control over. That’s a useful step.

What advice would you give to people looking to improve their life expectancy and stay in good health?

Sleep well, have a good attitude, follow a healthy Mediterranean-type diet, get some exercise, and ensure you have social support. Personally, I try to do this because I’m aware that in statistical studies, the more you do those things, the more likely you are to have better telomeres. So the advice is basically to remember what your mother told you. You don’t have to take fancy pills or anything like that. You can do this all for free.

« Just showing up and proving that female Nobel laureates do exist – that’s an important message. »

Where does telomere science now stand? What are the next challenges?

The exciting thing, I think, is trying to understand all aspects of this very dynamic system that somehow keeps the telomere in balance most of the time. In humans it doesn’t always work, but there are so many moving parts in this interesting, complex and resilient system designed to protect our chromosomes’ ends. You can’t just put up a wall to keep them out of harm’s way – DNA has to replicate and be repaired. All sorts of things have to happen to the chromosome ends. So the cell has very resilient, dynamic ways of taking care of that, and it sends signals if the process doesn’t work properly. The other exciting thing is how that plays out in the human body – in human health. It’s one aspect that interacts with all the other things that ultimately make us healthy or not. I think it’s very exciting to ask: How does the fact that our telomeres become unprotected at a certain rate throughout our lives interact with all the other things we do that influence whether we are going to recover from cancer or not, or whether we’re going to get cardiovascular disease or not? How do they all work together? Human health is an immensely complex system. But how does this particular aspect of biology interact with all the others? It’s a wonderful puzzle. There’s still a lot of work to be done. 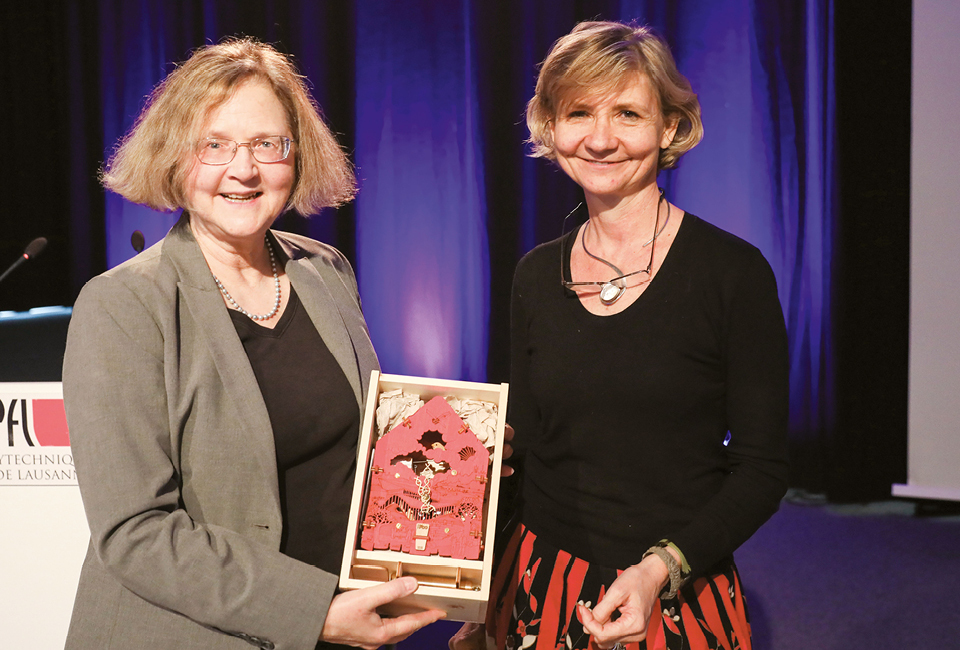 Elizabeth Blackburn and Gisou van der Goot, dean of School of Life Sciences, at the EPFL campus lecture on March 6, 2019.

What has the Nobel Prize changed in your life?

It makes me think more about how I spend my time and energy. There aren’t many women who have Nobel Prizes, so one of the things I feel is important is to be very visual. Just showing up and proving that female Nobel laureates do exist – that’s an important message. So I try to go to forums and things where I can be seen, particularly by women who are excited about careers in science. Of course, you don’t go into science because you want a Nobel Prize, but it is one sign that you can have a successful and very fulfilling career in science. It’s just one symbol of that.

Also, with a Nobel Prize I think you have access to things that perhaps you wouldn't have had access to before, so I really try to figure out how I can make use of that for the things I care about. For example, I’ve been thinking much more about how we can make science more accessible to everybody, so that the whole world benefits from it. There are many aspects to that question: How can we make sure scientific research thrives everywhere, and not just in wealthy places? And how can we announce such ideas? I think about those big questions and try to work with people in order to find ways to achieve that.

Is that why you wrote your book?

We wrote the book really to give people better access to what science has produced with the public’s funding. Almost all of the research was paid for with public money from governments. We’ve learned a lot of things – it’s all there in the journals. But the findings are scattered across many different specialty journals, and it’s often not accessible to those who aren’t scientists. Because it’s my field and because it’s information that’s quite helpful for people to have, my co-author, Elissa Epel, and I thought that putting it all in one place would make it more accessible.

1970: Degree in science from the University of Melbourne (Australia)

1975: PhD at the University of Cambridge (United Kingdom)

1985: Discovery of the telomerase enzyme as a professor at the University of California, Berkeley (UCB) (United States)

From 1990: Professor at the University of California, San Francisco (UCSF) (United States)

2009: Nobel Prize in Medicine for her work on the enzyme telomerase, with Carol Greider and Jack Szostak