fr Antje Boetius: A voice for the oceans and poles 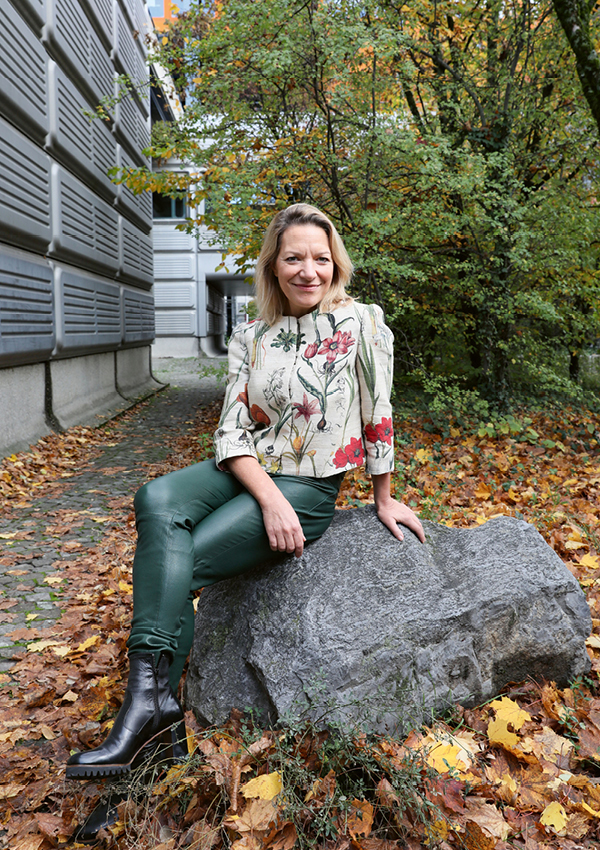 Antje Boetius: A voice for the oceans and poles

Antje Boetius was awarded the 2019 EPFL-WISH Foundation Erna Hamburger Prize. A veteran of numerous marine and polar expeditions, Boetius has seen the dramatic effects of climate change firsthand – and is sounding the alarm. EPFL Magazine had the pleasure of meeting her during her visit to EPFL.

«It’s the first time I’ve received a gender-specific prize like this.»

Professor Antje Boetius is a German marine biologist who has dedicated her career to polar and marine research. One of Prof. Boetius’s breakthroughs was to describe the anaerobic oxidation of methane by cooperating microbes. She believes that, in the absence of molecular oxygen, some of the early forms of life on Earth may have used methane as an energy source. She has also posited that such life forms are quietly keeping greenhouse cases in check. This is because methane, a greenhouse gas 25 times more potent than carbon dioxide, is found in vast quantities in the oceans. Several types of deep-ocean microorganisms can break it down and limit its release into the atmosphere.

A professor at the University of Bremen and group leader at the prestigious Max Planck Institute for Marine Microbiology, she received Germany’s Federal Cross of Merit in 2019. Since 2017, she serves as the director of the Alfred Wegener Institute, a Helmholtz Center for Polar and Marine Research, where she leads a team of 1,250 people.

What inspired you to take an interest in polar and marine research?

One of my inspirations was my grandfather, who was a sailor and captain. I also read a lot of ocean adventure stories. Growing up, my favorite book was Twenty Thousand Leagues Under the Sea by Jules Verne. As a kid, I had this romantic idea about life on the oceans. I imagined myself exploring the seabed in a submersible. I loved watching documentaries by Jacques Cousteau and Austrian divers Lotte and Hans Hass, and I read the book by Fridtjof Nansen, the famous Norwegian explorer who led the first Arctic drift expedition on a small ship, the Fram. I started studying biology in Hamburg in 1986 and soon had the chance to take part in expeditions. That was when I knew I’d made the right career choice.

You’ve been on at least 50 polar and ocean expeditions. Carrying out research in these extreme environments is logistically complex. Why do you believe it’s important to study these regions?

They play a major role in our everyday lives. Take the oceans, for example. Aside from being popular vacation spots, they produce half of the oxygen we breathe. We get 20% of our protein intake from saltwater fish. Oceans also absorb 93% of the extra heat from climate change, so they’re part of our natural balance – and part of the reason why there’s life on earth. Likewise, polar regions are part of our history. The Arctic and Antarctic ice caps have been stabilizing our climate ever since humans evolved over a million years ago.

The sad fact is that these regions are changing rapidly under the effect of climate change. This is going to have a dramatic impact on human life in the future. Part of my job is making it clear that these aren’t remote, distant environments. They’re part of us – and we should treat them accordingly.

Have you seen the effects of climate change for yourself on your expeditions?

We know that sea ice has been shrinking at a rate of around 13% a decade since 2000. I’ve seen it up close. I first visited the Arctic in 1993, when I was a PhD student. Back then, the ice was three or four meters thick. Our icebreaker had to work hard to clear a path to the site where we wanted to take samples. When I went back in 2012 as an expedition leader, the landscape was unrecognizable. The ice was melting rapidly and it was only one meter thick. Our boat cut through it with ease. In fact, 2012 turned out to be a record year for Arctic sea ice melt.

How is the retreating sea ice affecting marine life?

In the past, we’d observed algae – mostly Melosira arctica – growing thick filaments under the ice. But in 2012, when the ice was much thinner, the algae had disappeared from the ice and sunk down to the seabed. To our surprise, only two species of seabed organisms fed on the algae. This example shows how thinning ice alters the entire ecosystem from the surface to the deep-sea floor, including carbon cycles and food webs.

It’s really important to understand that sea ice is a habitat for many endemic species. The life forms that live there are a source of food for other endemic organisms. And when the Arctic thaws and their habitat shrinks, these unique species can’t just find another home elsewhere on Earth. I mean, take polar bears: they can’t survive without sea ice, and they can’t simply go and live in the Antarctic instead.

We know for a fact that human CO2 emissions are causing sea ice to retreat by the warming of atmosphere and ocean. The problem is particularly acute in the Arctic. Once these species are gone, there’s no bringing them back. We need to bear that in mind.

Part of your work focuses on marine microorganisms. Can you tell us more about that?

We know almost nothing about marine microbes. Yet, strangely enough, human life on Earth wouldn’t have been possible without them. I spent decades researching how these tiny organisms play a key role in keeping our planet functioning as we know it. My research focused on marine sediment bacteria – microbes that hide in the ocean floor and consume oil, gas and other forms of refractory carbon. My group is now tackling other research questions. How diverse are marine microbes? How do we influence them? How will they respond to our warming climate and changing oceans?

We need to be aware that every form of life – humans, animals and plants – is connected to a vast web of microbes. So when we change what we eat, how we build our homes, or what materials we use, the microbes that surround us also change. And that has repercussions for us.

You’ve signed a warning in Nature Reviews Microbiology calling attention to the role of microorganisms in climate change. Why are they so important?

My own research focuses on marine microbes that are helping to control emissions of greenhouse gases, such as frozen methane trapped in the oceans. But beyond that, I’m curious to explore how microbes respond in general to climate warming and other global-scale changes. I think we underestimate the role they might play in our future.

We still have many unanswered questions. How will microbes respond to heat waves and droughts, or to massive flooding? Will they help to control greenhouse gases, or will they actually make things worse as they become more active at warmer temperatures? We may see a positive feedback loop, whereby they end up consuming more carbon, producing more CO2 and further accelerating climate change. But they could also provide solutions in areas like producing hydrogen, designing new antibiotics or developing alternatives to meat. There’s a lot to think about.

There’s also a lot of uncertainty about carbon and nutrient cycles in terms of quantities, dynamics and the role that microbes play. It’s an area where we need systemic research. This is one of many research gaps in environmental microbiology. And these gaps are why we cannot say for certain how long we have to develop regenerative energy systems and build a circular economy. It’s also why many scientists felt compelled to sign a warning. We may know enough to deal with climate change, but we don’t know enough to say with certainty whether severe feedback loops will reduce the time we have to respond. 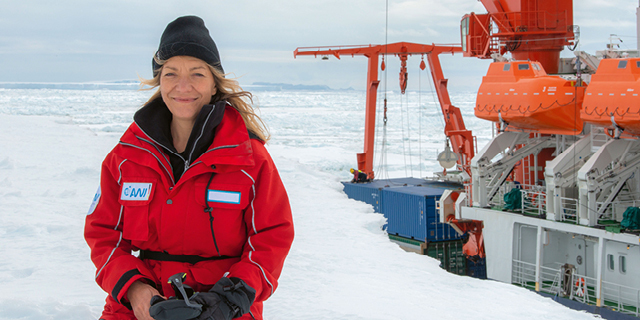 What can we do for the oceans?

Warming and acidification aside, more effort is needed to protect the oceans from pollution and over-exploitation. It’s really important to have ocean management and protection policies, and perhaps even an ocean police force. The world already has conservation goals and policies, domestically and globally, but I don’t think enough is being done to put those into action. There’s a huge gap between policymakers’ goals and promises, and what we actually see happening. Personally, I’m not happy with what governments are doing to take care of our natural world. As scientists, we have a responsibility to warn the public about the many risks we face in the coming decades. That’s why I take time out of my research and management duties to speak about these issues.

«As scientists, we have a responsibility to warn the public about the many risks we will face in the coming decades.»

Are you hopeful about the future?

I do have fears about the future but I remain generally optimistic. I think that, as long as we recognize and overcome our fears, we have enough knowledge, will and power to turn the situation around. I’ve seen many good solutions to environmental issues in my lifetime. We will close the hole in the ozone layer. And we’ve cleaned up our rivers and seas by switching to phosphate-free detergents. There are all sorts of solutions to the situation we face, be they social, technical or cultural. But progress can only happen with unity and dialogue.

How do you feel about receiving the Erna Hamburger Prize?

I was delighted when I heard the news. I appreciate the fact that the EPFL-WISH Foundation is recognizing women for their special contribution to science. It’s the first time I’ve received a gender-specific prize like this.

I think prizes in general help to shine a spotlight on people and topics that can make a difference. I’m also happy that the award ceremony gives me a platform to talk about climate change and my personal experience of the threats our oceans and polar regions face – and, of course, about the beauty of the landscapes I get to see as part of my work.

The Erna Hamburger Prize is awarded every year by the EPFL-WISH Foundation to an influential woman in science. The award is named after Erna Hamburger, who, when she was hired by EPFL in 1967, became the first female professor at a Swiss federal institute of technology.